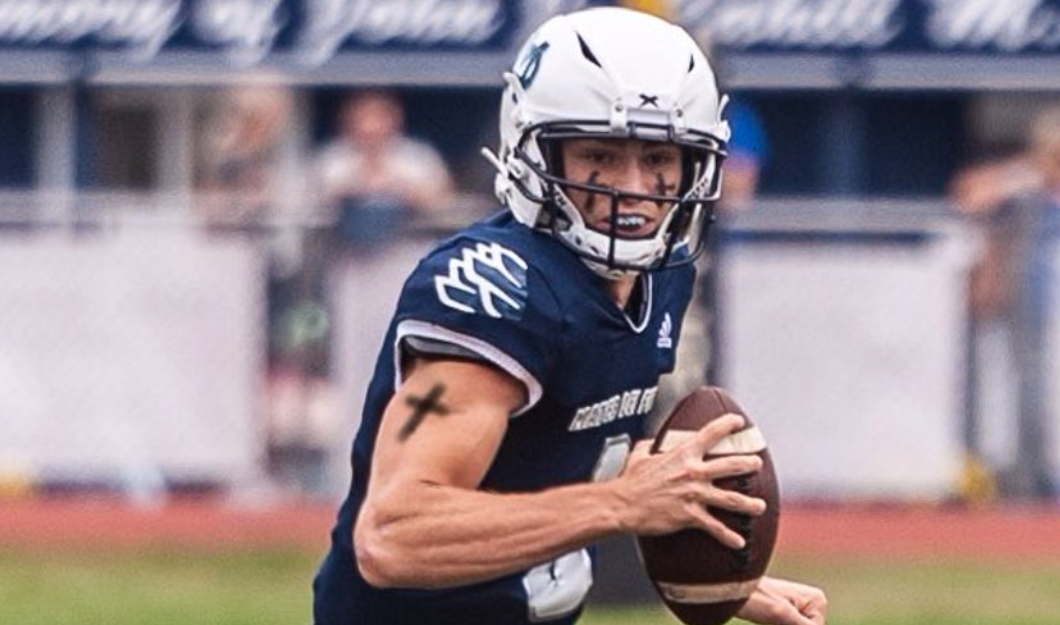 As cold as it may be in New Jersey, the action in the state is just heating up. The playoffs are here and that means another run for Mater Dei Prep. After an 10-2 campaign in 2018, the Seraphs are once again making a push for a deep playoff run with a 7-3 record led on offense by Class of 2022 quarterback Alex Brown. In stats posted through nine games of the season, their 6-3, 187-pound, emerging dual-threat has been on point hitting 67 percent of his passes for 1,600 yards with 14 touchdowns tossed while rushing 36 times for 217 yards with a trip into the end zone.

The Seraphs opened their playoff run with a big 49-14 win over Pope John XXIII and now must face a familiar playoff foe in Red Bank Catholic on their quest to hoist the 2019 championship trophy. In an RNG exclusive interview partnered with QB Hit List, I got a few minutes in with the New Monmouth area three-star prospect covering his game on the gridiron.

Alex, the offense for the Seraphs have been pounding it into the end zone this season putting up 31 a game. What is working for you within the offense allowing you to led the team up and down the field on Friday nights?

“We have a great offensive coordinator. He likes to throw the ball and we have an awesome running back (Malik Ingram). When they stack the box, we go downfield. With a running back like him, we are run-heavy. But when I get my chances, I make sure to take them.”

What offensive set are you guys in this season?

How does the offensive fit your skills?

“It fits perfectly. I am a dual-threat. I like to run and scramble if needed and I like to throw downfield. Our concepts are perfect for what I am capable of doing.”

You are airing it out downfield and hitting guys across the middle. Which routes are you throwing to this year?

“We have a lot of stuff over the middle – daggers, digs, humps, meshes. We like the post. Our No. 1 receiver (Clarence Lewis) is a Notre Dame commit. I love throwing the ball to him. We also have some quick game stuff like slants that I am throwing to this season.”

The offseason work on stepping up in the pocket to avoid the rush has worked really well with you seeing you keep your poise with your head up delivering the ball downfield to move the chains. What are some of the other parts of your game that you worked on in the offseason that are coming through on the field this season?

“Accuracy on my ball downfield and rolling out of the pocket like you said. When I roll out, I am very accurate on the run. My accuracy on the quick stuff like slants and digs has improved a lot.”

Which parts of your game are the strongest attributes to your talents?

“I like to throw it down field. The best part of my game is throwing on the run when rolling out of the pocket. Not many can do that consistently. I can run the ball, even though we have not done much of that this season. I am 24/7 studying film. I know exactly where to deliver the ball. I am always in the team room with my coach going over what the defense is doing that week.”

This season, which has been your best game from a performance standpoint?

“My first game of the season against Brick Township. I threw for three touchdowns and 225 yards on 16 of 19 passing, and they took us out in the first half. I made some pretty hard to make throws in that game.”

A quick turn into recruiting. With the season you have turned in so far, which schools are already showing interest?

“Yes. I plan on going to Rutgers, Boston College, Ohio State, and Princeton after the season.”

The Seraphs got a big 49-14 win over Pope John XXIII on Saturday. How did the game go for you?

“I had a pretty good game. We had two big throws that were called back that would have had me over 200 passing; I had one touchdown. We dominated on both sides of the ball. It was great to compete against a kid in my class who has an offer from Rutgers. It is great competing against the Big North teams.”

This Friday you guys get Red Bank Catholic (5-4). What are you looking at from the Caseys’ defense in the next round of the playoffs?

“We are ready to compete with them. We see some exposures we can take advantage of. We are ready to get what we deserved from last year (lost 14-10 in playoffs).”

Alex, any last words before we wrap up the interview?

“I’m excited to see what we can do in the playoffs this season and I am ready to take that next step next year. I am ready to show my offensive coordinator and Coach Dino (Mangiero), and the school as well, what I got.”

Alex, thanks for your time today and good luck throughout the playoff run.