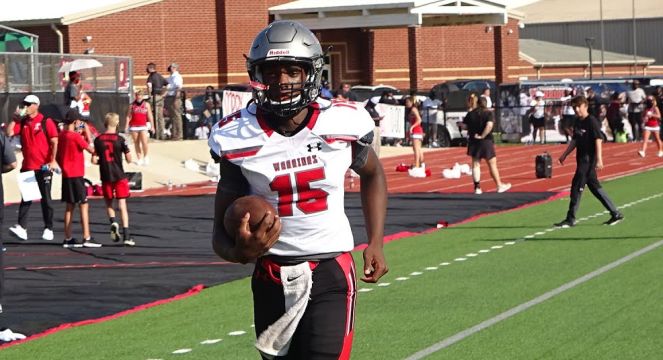 Being the top dog distributing the rock on the top-rated team in Alabama, sixth ranked in the nation (MaxPreps), carries weight. After the season turned in by Class of 2022 quarterback Conner Harrell, college programs are taking notice. The 6-1, 190-pound, gunslinger earned first team All-Everything including All-State after leading Thompson High School to a 7A state championship posting a 14-0 record. During the onslaught, Harrell hit 229 of 312 passes for 3,568 yards with 42 touchdowns against just three interceptions. When needed, the three-star recruit could break the back of defenses with his legs covering 319 yards on the ground with five trips into the end zone.

In an RNG exclusive partnered with QB Hit List, Harrell sat down for a one-on-one conversation giving insight to the Warriors perfect season, his growth in the pocket, and his growing recruiting process.

Conner, I gotta start of congratulating you on the 7A state championship win.

What was that moment like walking off the field with a 29-28 win over Auburn?

Man, it was surreal. It was a great feeling. My team came through, they kept balling. It was great. The way we won, on a blocked punt and then Trevor hit the field goal. Tre (Roberson) stepped in for me, and our defense did a great job. We came together to make a miracle happen. It was nothing short of a miracle.

The receivers in your group had to be very happy with two putting up 1,100-plus and four with 30 or more receptions. When you were distributing the ball, what routes were your guys running?

Our coach installed a Spread offense, he puts in a great game plan each week. It is hard to explain because it all depended on coverages each week. Throughout the year we took what the defense was giving us. Our running backs had big games, JB and Ryan were really big in the playoffs. We throw a lot of go routes and a lot of read routes. What we ran depended on leverages on safeties. A lot of teams played us deep, so we’d go with hitch routes underneath.

You just mentioned this, going deeper. With Jarrett Crockett in the backfield, the play-action fakes were drawing in the defenders. When you were dropping back, what coverages were you going against?

We saw almost everything. Hoover threw a lot at us. A lot of the defenses had the safeties dropping back, they didn’t want us to go deep, keeping everything in front of them. We did not see much man. In the state championship game, that was the only game we saw man.

On that march to the history books, how did you see your overall talents as a passing quarterback improve?

I was learning throughout the year; this was my first year starting. I was learning protections and doing a better job of stepping up in the pocket. As the season went on, there was less to worry about with the experience. My improvisation was another area that improved. I kept progressing and kept getting better.

Your footspeed gives an extra element to the offense making it near impossible for defenses to stop you guys. How did that part of your game improve during your junior year?

I don’t look first to run, I take what the defense is giving me. I have that ability to run, and they know that. They always have to watch me on the run. My first priority is to read, go through my progressions, but if the pressure comes, I can extend the play with my legs.

Your ability to take care of the ball with only three interceptions against 42 passing touchdowns is a strength in my book. What do you feel are some of the other traits to your game that make you different than other 2022 QBs?

Being able to have that balance, for me the run and the pass, my accuracy, and my leadership. Being able to balance between running and throwing is a strength.

What are you working on this offseason with your technique?

I work with a QB coach, Coach Tagovailoa. I am learning a lot from him. He is a really good coach. He coached Tua and Taulia. I am lucky to train with one of the best QB coaches out there.

Let’s get into recruiting. After the team won the state title, which teams are now showing interest?

How many offers have been given to you?

I now have five offers.

Who was the fifth offer?

*On Jan. 30, Harrell picked up his sixth offer from Appalachian State

When did you get that offer?

Which coach called you to give you the good news?

Very cool. What did he say to you? How did he notify you of the offer?

He talked about how he liked my film, that he’s been watching us, he is from Birmingham, and he asked about our slot Ryan Peppins. He asked if I liked to Tulane, I said yes, and he offered me.

When visits are allowed again, are there any you’d like to take?

I have no idea yet. I have not sat down with my parents on this. I will visit the schools that have offered me, but beyond that I am not sure.

As the 2021 class wraps up their recruiting cycle on Feb. 3, what are you looking at with these various recruiting hauls? When you look at any school during this process, what are you taking notes on?

I like to know the offense they run. I can work in any offense, but do they throw the ball a lot. Do they have good numbers that are progressing and a good coaching staff? I haven’t talked to too many schools yet to get into all the specifics.

Conner, thanks for talking to us today about Thompson’s championship season and your recruiting process. Keep up the hard work this offseason.