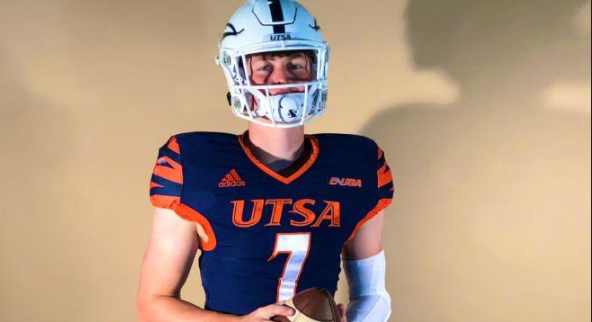 Nothing better than seeing the competitive spirit unleashed in athletes. This summer, even with five offers down and three-star recruiting status tied to his name, Class of 2022 quarterback Tanner Murray is ready to sling it at top college camps proving he is among the best in his class.

When Murray hits the collegiate fields this summer, he will be doing so with great momentum behind him. He closed out his junior season earning first team All-District honors after tossing for 1,659 yards with 13 touchdowns while rushing for 469 yards off 99 totes with eight solo trips into the end zone through the Lobos’ nine-game 2020 schedule. In addition to being a field general for Langham Creek, he is also a true student-athlete carrying a 4.1 GPA.

For a closer look at Murray’s talents in the pocket and feverish camp schedule, he stopped by the RNG Clubhouse for a one-on-one interview partnered with QB Hit List.

Tanner, before we start talking about your arm talents as a quarterback, I want to talk about your running skills. You got some wheels on you and you like to lower the boom on defensive backs. How did that part of your game take big steps forward during the 2020 season?

This year, in previous years I was not asked to run as much. This year it was good to help my team by running the ball as well as passing.

What offensive attack were you executing during the 2020 season?

We are supposed to be an Air Raid, but we like to push it down field, not just dink and dunk but push it 20 or more yards down. We have some RPO (run-pass option), that is like 5 to 10 percent of our plays.

With your running abilities, you have that mobility in the pocket buying time for your receivers to get that separation. Are you give the green light to run when you see green grass?

If the receiver is open, 100 percent I am throwing it. If I see green grass, I am taking off.

As you make your reads, I see you looking off defensive backs like a veteran giving your receivers an edge. How do you go about making your pre- and post-snap reads?

Our system, we like to focus on one guy and some other plays we focus on two guys. Pre-snap I know what I need to look for each time. With the play, I know the key and the read. I know what I am doing and I am confident in our coaches calls.

What were some of the routes your receivers were running in 2020?

We ran a lot of skinny posts, seams, comebacks, pushing the ball downfield and getting in the zones the best we could.

Our receiver, (Jaquaize) Pettaway, get it to him as much as possible. He is a freak with the ball. With our offense, there will be a lot of similarities from last year but way more potent.

What have you been working on with the fundamentals preparing for your senior year?

I have been practicing on progressions, knowing my reads for each play, and the simple mechanics with my lower and upper body when throwing the ball.

Going up on the white board and watching film, how are you expanding your understanding of defenses?

Right now, even when training, we work the white board a lot and with my team during spring ball. We’d take our plays and put them against different defenses seeing which plays work against different coverages.

Have you been to any national camps this offseason?

Yes, I went to the Elite 11 Regional in late March in Houston.

I think it was a good experience playing against other quarterbacks from across the country. I could have performed better.

Are there any college camps you may attend this summer?

Yes, tomorrow (June 3) I am going to UTSA, Texas Tech on the 4th, SMU on the 5th, TCU on 6th, and U-of-H (Houston) on the 9th. Sometime in mid-June I will be going to Arizona State. They are showing a lot of interest.

Let’s stick with that. Which programs are showing interest?

Arizona State, U-of-H, I have been talking to Coach Dawson a lot in past couple of weeks, and Utah State; they will be at the SMU camp. Duke is showing interest and I am going to HBU (Houston Baptist); they will also be at SMU.

You already mentioned some visits when talking about the camps, which all visits will you be taking as of right now?

Tomorrow I am visiting UTSA, Rice as well, Arizona State, and I will see what other colleges show interest after the camps are over.

Tanner, thanks for your time today. Wishing you great success at all the college camps.