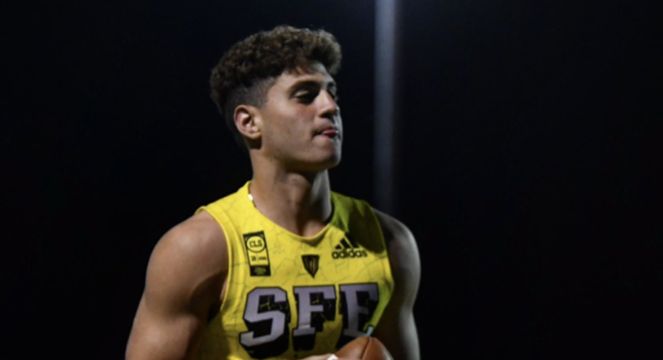 Throughout the 2020 season, Dylan Rizk was throwing darts around the field with American Heritage picking apart Florida defenses. The 6-2, 190-pound, gunslinger hit on 69 percent of his attempts covering 2,075 yards with 19 scores and rushed the pigskin into the end zone three times. When the lights turn on for his junior campaign come Friday nights, the three-star recruit will be suiting up with Fort Lauderdale’s Cardinal Gibbons going from a Spread to Air Raid attack.

In an RNG catch-up interview, the Class of 2023 quarterback covers ground on his sophomore run with a look at his new offense and recruiting.

Dylan, you were airing it out during the 2020 season. Did you have fun working the pigskin around the yard during your sophomore campaign?

It was a great time playing with all your friends and developing the bonds from the offseason to the season. Throwing a deep pass is the best feeling and celebrate with friends. Football is about having fun.

What offense were you running?

How were defenses lining up against you?

Cardinal Gibbons was running a defense I had not seen, it was a Cover 3 with a Cover 4 look. They’d roll their safeties. Other schools brought a lot of pressure or were running a simple Cover 3.

Going against top competition, how did your understanding of coverages grow helping you with your pre- and post-snap reads?

Going against more complex defenses meant I had more film to watch that week. For Cardinal Gibbons, I watched a lot of film. We had a great scheme against them. Watching film on a team, you can take out certain players and know what to expect.

In which game did you turn in your best performance of the season?

Which traits to your game are now the strengths to your abilities as a QB?

My biggest growth of the season is the mental aspect. You can have the strongest arm, fastest feet, or be the biggest, but if you don’t have the mental you will not go anywhere. Tom Brady is the smartest guy on the field, that is how he became so successful.

What have you been working on this offseason with your footwork and technique?

I am working out every day with my new school. We’ve been training and I have been throwing with my receivers a lot working to connect with them. I work out five to six times a week with a focus on my mobility and stretching to not get hurt. And, of course, I want to be faster.

When did you transfer to Cardinal Gibbons?

About a month ago, at the beginning of the semester.

With the Chiefs, what style of offense will you be running?

We are an Air Raid attack.

Are there any challenges or goals you have set for yourself over the spring months that you want to accomplish?

Yes, doing well at the Elite 11 Regional; I will be going to that. The biggest goal for me and the team is to get another state championship. I will continue to bond with the team, have a good spring season, and get bigger, faster, and stronger.

Are you playing 7v7 this spring?

Yes, with Gibbons for a little bit.

How is that going?

Very well. We had our first tournament, we went undefeated. It went well.

You mentioned the Elite 11 Regional, are there any other camps you may attend coming up?

The Under Armour camp. I don’t think there is a Rivals camp this year because of COVID.

Let’s get into recruiting. You have an offer from Kentucky, which other schools are showing interest?

Miami, Indiana, a little bit from Oklahoma, and Ohio State. They have been showing me the most interest.

This summer, are there any visits you’d like to take?

I am going to visit Miami this summer during one of their 7v7 tournaments with Gibbons. I want to go everywhere, Florida, Clemson, Ohio State, and Kentucky.

Dylan, it was great catching up with you today. Wishing you and the team success this 7v7 season.