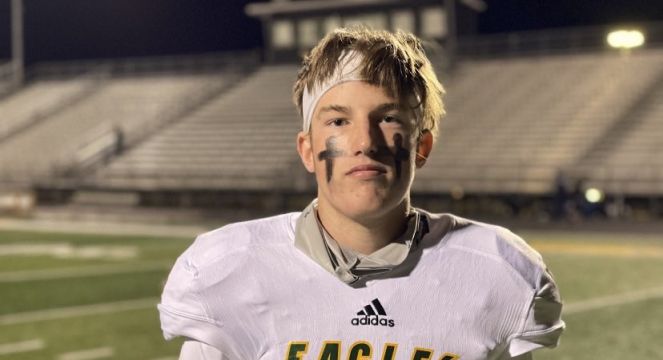 If you are a TAPPS II opponent of Fort Bend Christian Academy, you may not like watching Brady Dever spinning the rock. But for everyone else, the 6-1, 185-pound, Class of 2023 rifleman is putting on a show worth more than the price of admission.

Dever pushed the Eagles to an 8-3 record in 2020 going against Texas defenses slinging the ball for 2,377 yards with 26 touchdowns and took one in himself. Averaging 216 yards per game has helped Dever earn three-star recruiting status and an overwhelming amount of recruiting interest from the next level. Aiding in his recruiting process, Dever is a 5.0 GPA student and a two-sport standout also receiving looks for his skills on the diamond.

In an RNG exclusive interview partnered with QB Hit List, Dever hits the questions out of the park covering ground on the gridiron and from the dugout.

Brady, as sophomore seasons go, especially against Texas competition, you were airing it out making big plays happen. What offensive scheme were you executing with the Eagles in 2020?

We were running a Spread with four receivers and one back. We were doing basic concepts like Smash, some RPO, and flood. The basic stuff like that.

There are little things to your game that make a big difference. A couple of things I noticed was your looks, your lock-ins and then going the other way, and your shoulder or pump fakes. What are some of the other smaller details to your game that you’ve worked so hard on that some may not notice?

The biggest strength to my game is my accuracy, making the tight window throws. Like you said, I can make people move with my looks and pump fakes getting my receivers more room and I can get the ball to them. Another thing is changing the protection at the line if I notice blitz. Or I can move the running back to where the blitz is coming. I can also alert the receiver to replace the spot. If you get the receiver some room to make a play, he’ll get more yards after the catch.

In which game did you turn in your best performance in 2020?

My best game stat wise came against our last regular season opponent, John Paul. I threw for 71 percent, 408 yards, with three touchdowns and set the school record for yards. My best overall game, with my best reads, was in a loss against Second Baptist. We had some miscues and we were not moving the ball much. But I was most prepared for that game.

How did you prepare week to week for each game?

Our coaches help us a lot with the opponent’s defense. They did a great job preparing our offense for the looks that they were going to give us. I was watching a lot of film with the coaches seeing how the corners and linebackers will play against us, what the defense will do, and the blitzes we’d see. Doing that helped us prepare for the team we were going to play.

Which areas of your game showed great improvement with the live-action experience during your sophomore season?

A big part was confidence. At the beginning of the season, I had no varsity reps. But with each game I got better and better. Throughout the season I was building up my confidence and got more comfortable. My pocket awareness improved a lot. Our line this year was really good. We had three D-I offensive linemen; I felt comfortable in the pocket with them. I knew what they were going to do with blitzes and I was able to step up and throw and I could get better angles on throws I wanted to make.

What are you fine-tuning with your fundamentals this offseason?

A big part of this offseason is getting faster and stronger. Skill wise, I am working on my footwork and getting better in the pocket. I am also working on throwing on the run, my pocket movement, and avoiding the rush. I am just trying to get better.

Are you playing 7v7?

Yes, sir. I am playing with Texas Stars, and will play for Team Texas Fury

It is newer to me; I have never done this before. I was a baseball first guy but this year I am taking football more seriously. As I play in more tournaments, I am more comfortable and know what to do with each situation.

Have you been to any camps this offseason or do you have any coming up?

None yet, but this weekend I am going to attend an FBU camp; one in San Antonio and one in Austin. I will also go to the Manning Passing Academy this summer. If I can, I will go to some showcases in my area like Rivals.

I have some Ivy League schools, UMass, Oklahoma State, and some Twitter follows from UH (Houston), and Baylor. There are a lot of northeastern schools that have shown interest. My dad is from that area. I have a lot of family up there.

When visits get going again this summer, are there any schools you might go see?

I want to visit USC; I really like what they are doing there. Notre Dame is another school I’d like to see again. TCU too. I visited there this past summer. I really like their campus but want to explore there more. Columbia is another one. I want to see their football facilities, and same with Boston College. I visited there last winter; it was really cold. I did not see much on that visit.

A few minutes ago, you mentioned playing baseball, which positions do you play?

Third, shortstop, first, some outfield and I pitch a little.

Are you also getting looks for baseball?

Which college programs are showing interest in you for baseball?

I have no offers yet, but schools like Wake Forest, Notre Dame, Georgetown, the Ivy Leagues, Boston College, Houston, and TCU.

Awesome. Brady, I enjoyed it. Wishing you success with your workouts, 7v7, and baseball season until we talk again.