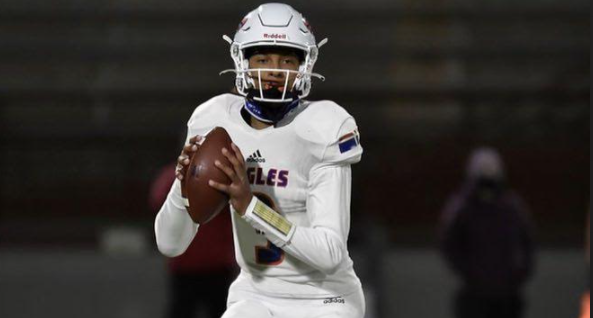 The five-game 2020 season for Graham-Kapowsin High School was a smashing success rolling to a 5-0 record against 4A Washington squads. As the defense clamped down on the opposition, the Eagles’ offense laid it on forcing teams to try to keep pace. The on-the-field architect guiding the offense to an average of 37.3 points per game was Class of 2022 quarterback Joshua Wood.

In the time allotted, Wood put on a show. The 6-3, 185-pound, rising dual-threat was on point with his targets completing 64.8 percent of his throws covering 989 yards with 11 touchdowns tossed. With a deep backfield, Wood did not have to run much covering 80 yards off 14 totes with one trip into the end zone.

Wood’s starting varsity season in the pocket is attracting a crowd. The three-star recruit is receiving interest from Eastern Washington, Idaho State, Nevada, UCLA, Weber State, University of San Diego, Idaho, Yale, and Northern Arizona. A payoff for Wood and college coaches is set to happen this summer when camps go full-tilt beginning in June.

In an RNG exclusive partnered with QB Hit List, Wood covers ground on his breakout season with the Eagles while updating his busy summer schedule.

Joshua, the 2020 season was a big one for you in more ways than one taking over the Eagles’ offense. Leading into your junior season, how did you mentally prepare to run the offense and for the defenses you might go against?

I’ve known this offense since I was young. I have been with the Eagles since the third grade. For me preparing against coverages, that was studying film and being with the offensive coordinator and our head coach, Coach Logan and Coach Kurle (head coach). Going over the defenses with them the week of the game, they got me mentally prepared to attack the defense.

Looks like you were working within an Air Raid construct during the 2020 campaign. With five going out on routes, how were defenses trying to knock you off rhythm?

They’d drop seven to eight, they didn’t want to blitz me because I could make something happen with my legs. They kept dropping seven to eight and rushing three.

Not only were you connecting on your attempts at a high rate but your touchdown to interception ratio was off the charts (11/1). What was instrumental in you being able to execute the offense at such a high level giving your unit opportunities to move the ball downfield and score?

In which game did you turn in your best personal performance of the season?

I feel like it was Puyallup or Sumner. Against Puyallup, that was when everyone saw what I can really do. The other games this season were glimpses. In the others, I didn’t run or have to go deep, they were playing off. In those games I saw man or Cover 3 and Cover 4. Those were the two best games. We passed a little bit more in those games.

Building off the undefeated season, what are you working on this offseason with your mechanics preparing for your senior season?

Are you working with a QB trainer this spring?

Yes. I am. It’ll probably be multiple trainers this summer, Vernon Adams and Jeffery Solomon.

What are you working on with your trainers?

With Coach Jeffery, it is everything. Really, it is everything with both of them. I am working step by step to get better. With Coach Vernon, it is more off-balance throws, getting out of the pocket, focusing on footwork, opening up the gate, technique and mechanics.

Are there any camps on your schedule for this summer?

I will be going to the Elite 11 on June 6, if I don’t have basketball. On June 12, in Portland, I am going to the Lewis and Clark Camp and the Northwest 9 in Washington. I’m also planning on going to an Arizona camp on June 18.

Josh, I appreciate your time today. Keep up the hard work and good luck at the camps this summer.