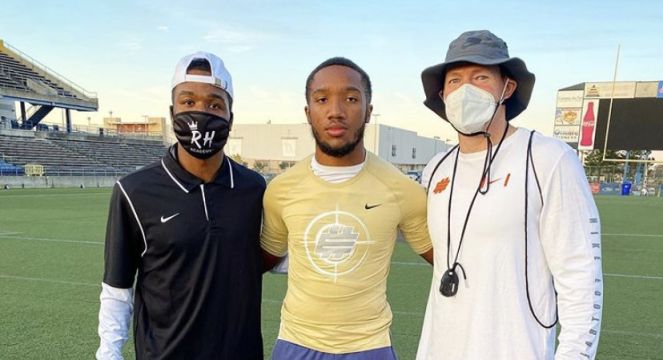 There will be a momentous shift on the game reel for Class of 2022 quarterback Chase Williams for college coaches to see once the 2020 season gets going in the D.C./Maryland area. The 6-1, 195-pound, field general is going from a run-heavy approach at Our Lady of Good Counsel to a pass-happy attack at St. Alban’s, and the three-star talent has the arm to make it a deadly attack. Williams has all the skills proving his abilities at the Elite 11 Regional in Virginia Beach taking on all the top arms from Maryland, Virginia, North Carolina and beyond. Williams won the pro-day challenge and best performance of the day.

Ahead of the commencement of the 2020 season, recruiting interest is ranging from Ohio, Wake Forest, Maryland, Davidson, Buffalo, and some Ivy League looks from UPenn, Columbia, and Harvard.

Chase, it is fun watching you sling the ball around the yard. Going back to the 2019 season you were doing a lot in a multifaceted offense. What were some of the sets you were running then?

We stayed in 21 personnel, especially towards the end in conference. My freshman and eighth grade year, they were run heavy at Good Counsel. We had three elite backs. We stayed in 21 to stay heavy to continue our run threat. It worked well with our offense. We were pounding the ball and doing short passes. After pounding it, we would spread it out and put the ball in the air when we needed.

Given the different looks, what were some of the routes you were connecting with your receivers?

Comebacks, 18 to 15 and 12-yards, posts, digs, underneath routes, short out routes to the outside and inside receivers, and slants. We did a lot of comebacks, deep posts, and corners.

Throughout the offseason, what have you been working on with your mechanics and footwork?

I have been working with a quarterback coach. When the season ended, we honed in on easy throws where they become automatic, three-step and five-step rhythm throws, and some seven-steps too. We worked on my basic mechanics where that is automatic and then went to off-platform on the run stuff. We kept building on and building on, while keeping everything intact. The workouts have gone through all scenarios the game presents.

What have you been doing to expand your football IQ?

I have been talking with my new coaches, talking more scheme, and watching tape on the teams I will be playing against this season. A new conference and a new team this year. It will be different from Good Counsel and with the teams we faced, I will be seeing new looks on defense. I have been talking football with my QB coach, watching film, and breaking down NFL quarterbacks on YouTube. I am always eager to learn more stuff.

During the offseason, you transferred to St. Alban’s. What style of offense will you be executing in 2020?

It is much different from Good Counsel. There we stayed under center in 21 personnel. We will spread it out lining up in the gun and pistol looks. We will be more of an air attack than on the run with a lot of passing in the spread.

What is the status of the season in the Washington, D.C., area?

It is pretty crazy. The mayor pushed all sporting activities back until March. It is in limbo. I am hearing all sorts of things. Nothing is set in stone. The surrounding counties are playing; that gives me hope. We are the only D.C. team in our conference. I feel confident we will play, but I have no concrete answer but an optimistic one.

How have you been preparing for the upcoming season building chemistry with the guys?

I have been getting together with my guys as much as possible. Some are from all over the area, Virginia, Maryland, and D.C. We try to find some neutral sites. We try to get it in as much as possible and we’ve been lifting weights. We have the same speed coach and have been working out with him. He works us out and then we throw after and go lift. As much as we can we’ve been working on building up that chemistry for when we are called upon to play.

After all that you have worked on with your game, which areas have shown the biggest improvements? Bonus question, what are you excited to showcase to the fans and college coaches?

Chase, I had a lot of fun talking football with you today learning more about your skills. Keep up the hard work.