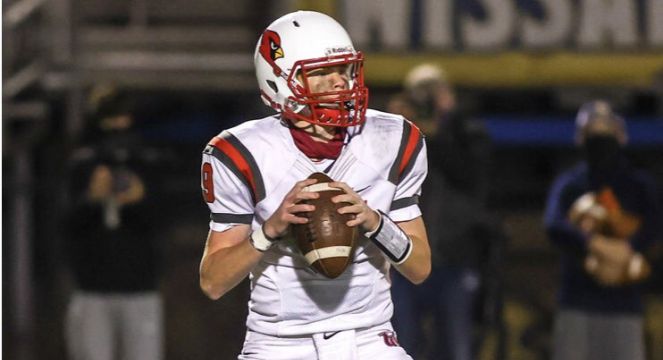 Playing a sport at the highest levels is all about being prepared to rise to occasion whenever called upon. He didn’t know it over the 2019 offseason, but Colin O’Sullivan (5-11, 166) was about to be called upon to lead a roster full of 5A Pennsylvania upperclassmen into battle. As the season progressed O’Sullivan did his job, and that experience is coming into play during his sophomore campaign.

Ahead of the 2019 season, the coaching staff at Hatboro-Horsham High School held a quarterback competition seeing a freshman as the leader of their offense. O’Sullivan completed 109 passes covering 1,444 yards with 13 touchdowns tossed over the 10-game schedule. Over the offseason, O’Sullivan transferred from Hatboro-Horsham to Upper Dublin once again earning his way as QB1. The Cardinals are off to a 2-1 start.

As the season gets going with the Cardinals, the No. 1 ranked Class of 2023 quarterback in Pennsylvania (QB Hit List) is drawing early interest from a few Ivy League schools like Pennsylvania and Brown along with Villanova. To talk about his progress on the field and challenges slinging the pigskin against 5A defenses, O’Sullivan sat down for an RNG interview partnered with QB Hit List.

Colin, you had a baptism by football fire last season starting for Hatboro-Horsham. What was that experience like for you getting 10 games in against 5A Pennsylvania defenses?

I got to play under Hall of Fame coach Mark Schmidt. I was the first ever quarterback to play for him. The offense ran really well. He had me doing simple reads. Still, it was a big jump from youth to high school ball for me, especially going against some big 6A teams.

What style of offense were you executing with the Hatters?

We ran more of a pro-style offense with a run-first mindset. Coach Schmidt adapted the offense to me. As the season got going, we threw more. As the season went on and was understanding everything better, that got my confidence going.

When the season ended, what did you feel you had learned the most about the game with all the varsity reps?

I learned that confidence is a big factor playing quarterback. I got used to the speed of the game. Another thing I learned was you can’t predetermine who you are throwing the ball to, you have to make the right reads.

Over the offseason, what did you work on with your technique and mechanics?

You transferred from Hatboro to Upper Dublin. With the new offense, what are you now executing with the Cardinals?

We are still working on the offense, but we are more of a Spread team. I really like Coach (Bret) Stover. Going into the season, it was a difficult jump for all of us on offense barely getting any reps because of the virus. We are heavy on the run game right now, but I think it will start to open up as I get more reps in the offense.

I’m sure that is really difficult running a new offense with new players without the benefit of a full offseason.

How do your skills translate and work within the Cardinals’ scheme?

I do a lot of pre-snap reads. I am really smart, and always want to be the smartest player on the field. Our offense is quarterback friendly. I am succeeding so far this season in the new offense.

What routes are your receivers running this season?

We have outs, posts, corners, and when they are playing off, bubbles and hitches.

How are defenses lining up against you guys?

So far, we are getting a lot of Cover 4 defenses. We have a smaller offensive lineman; they are trying to force us to run. There are a lot of people outside the box.

Two games into your sophomore season, what do you now feel are the strengths to your overall game?

Is there a trait to your game that may get overlooked?

Yes, my leadership. Especially coming to a new team. I did not get a lot of reps or time to get to know everyone before the season began. It was tough walking into the locker room as a new guy taking over as a leader on the team as the season was beginning, but I did it. I am not a dual-threat but I can extend plays.

The Cardinals get Council Rock North (1-1) next. What kind of game can the fans expect in this one?

They are in Cover 4 a lot. They are giving us the underneath and run game. There will not be a lot of deep shots in this one. We will be making our way down the field gradually.

Once the 2020 season is completed, what all do you want to have accomplished?

I want to keep getting bigger, stronger, and faster. I also want to keep improving on my arm strength, work on escaping the pocket, and running more. After a 2-1 start with a good shot to make the playoffs, which I am happy with, making the playoffs is the most important thing for me right now.

Let’s go off the field for a minute. What is your cumulative GPA?

What is your favorite subject in school?

History, I like to learn about things that came before me.

Do you play any other varsity sports?

Last year I started on the basketball team at point guard.

Impressive again. Colin, thanks for your time today and good luck with the rest of the season until we talk again.