Interview: The Talents of 3-Star 2021 Texas QB Drew Berra Can No Longer Wait 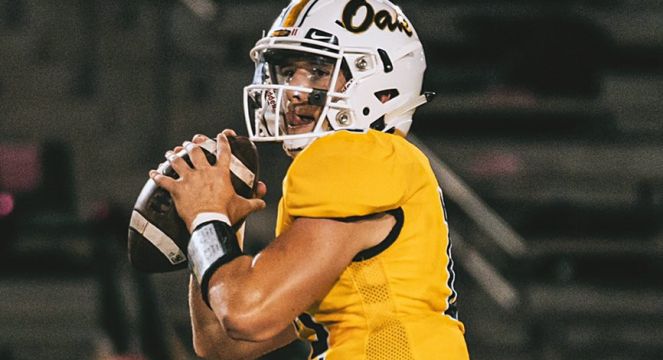 In all things in life, time can be a blessing or a curse. When it comes to high school football, each player lacing up the cleats only has so much time to showcase what they can do on the field in hopes of catching the eye of college coaches for that desired offer to play at the next level. After a breakthrough 2017 season, Class of 2021 quarterback Drew Berra has been waiting his turn due to circumstances beyond his control but has the skills and determination to make the given time remaining a blessing on the field.

Berra began drawing attention his way after carving up Texas defenses as a freshman completing 79 of 111 passes for 1,457 yards with 16 touchdowns while covering 117 on the ground with a trip into the end zone. An arm and a knee injury slowed Berra’s progress on the field coupled with playing behind two-year starter Montrell Bolton in 2019. In limited snaps, the 6-1, 195-pound, quarterback completed 11 of 19 passes for 97 yards with a score and rushed for 25 yards as a junior. The three-star rated quarterback is preparing for a big senior season with Klein Oak High School ready to prove his worthiness to college coaches against top 6A Houston competition.

Once college coaches get to see Berra’s talents in-person, the transcripts will also not disappoint. The true student-athlete carries a 5.14 cumulative GPA with a 1210 on the SAT.

In an RNG first-look partnered with QB Hit List, I sat down with Berra for an in-depth talk about his play on the field and how he is preparing to lead the Panthers in 2020.

Drew, what offense were you executing with the Panthers during the 2019 season?

“We had some very talented running backs and receivers. With that talent we have, we run a very balanced offense running and passing the way we want efficiently. We are always in shotgun hurting teams with the Spread.”

“It went well. There were some things out of my control, an injury in a game and I was behind a talented senior. Part of living in a community like this, there is great talent at every position. The injuries I had as a sophomore and part of my junior year limited me. When I came back, I was behind a returning starter. When I came in last season on offense, we did not skip a beat.

“Overall team wise, 6A Texas football is probably the highest caliber football in the country. We had a successful season coming just short of district; we lost two games by a total of four points during the regular season. Lost to a good Rockwall team in the playoffs (37-27). We are never satisfied.”

How would you describe your style of play as a quarterback?

“I see myself as more of a pro-style. One of my strong suits is being able to read the defense and knowing where my guys will be and when. I am patient, trusting of the offensive line and that everyone to do their job. I can get out of the pocket when needed, but look to get the ball to the playmakers. I am a patient passer who is getting out when needed.”

In the time permitted last season, how did your overall game improve?

Let’s cover your injury. What limited you during your sophomore and junior seasons?

“During my freshman year I led our team to our first district championship in 30 years. But I had arm problems at the end of the season. Then, I was 5-7, 170-pounds, and I was growing too quick for my arm. In spring ball, I threw my arm out and did not have a lot of time before August to fully rehab before the season began; my arm is my bread and butter.

“Going into my sophomore season, during a scrimmage in August I was getting out of the pocket and was hit in the knee breaking two bones in my leg requiring another surgery. I rehabbed my knee and came back. I can only control what I can control; it was all unfortunate.

“Now I am back running faster and throwing further than I ever had after two setbacks. I have full confidence in my abilities now. My high school story has been different, but that is the way it has worked out. I keep getting up after being knocked down because of the love I have for and from my team, family, and coaches. The love for the position has made it easy to get back up each time. I have waited patiently for my chance, now I cannot wait any longer. This season will be a lot of fun.”

A minute ago, you kind of touched on this, but what all are you working on with your game this spring?

“A lot of off-platform throws, not the perfect sitting in the pocket throws. I am making realistic game situation throws off blitzes, a guy in our face, and you are out of pocket looking for the receiver. I am improving those throws as I am getting chased – having to throw into a tight window. It will never be a perfect situation to throw it in a game.”

During this time it has been tough for everyone to work together, but how have you been developing chemistry with your receivers for success on the field this season?

“Some of the receivers on the team are my closest friends. We went this morning, in smaller groups with the virus, to work together. We are throwing routes every other day working on timing and some new plays that are being installed. It has been what I look forward to with my day getting away from this situation. We are looking forward to the fall. Our chemistry is second to none. With this work put in, I know how they will run their routes this season.”

If the opportunity opens up, are there any college camps you may compete at this summer?

“I was really looking forward to spring ball, but that was cancelled along with all the Junior Days. Some of the camps I am looking at the Ivy League schools like Yale, Cornell, Columbia along with Furman and Sam Houston – those are some of the schools I have been in contact with lately. All has been unorthodox with recruiting. I am just going along with the cards dealt and with minimal film, but I am ready for a big senior season. As far as camps, I plan on competing at some Ivy League camps, at Rice, and other camps around here.”

Being the quarterback of a team is important in more ways than one, especially with one’s leadership. How do you think others see you as a leader on the team?

“I am one of our team captains. My leadership, that is one quality that I have; ask my coaches and teammates. I think that would be the first thing they would bring up. In practice and games, I am a vocal guy. I don’t like seeing things being done the wrong way. You don’t talk about being one of the best, you have to also do things the right way. That is one of my favorite things about football and what makes football fun for me, being a leader.”

Nice. Last question, my virus buster. What have you been doing for fun during this extra downtime?

“For fun, football is fun. A lot of my day is getting my football work done; I have been working out. Other than that, I have been playing Call of Duty. But over the break I realized I am not good at video games. Some of my buddies and I live in the same area. We get to see each other regularly, that keeps you sane.”

Drew, thanks for your time today and good luck with the rest of your workouts this spring.