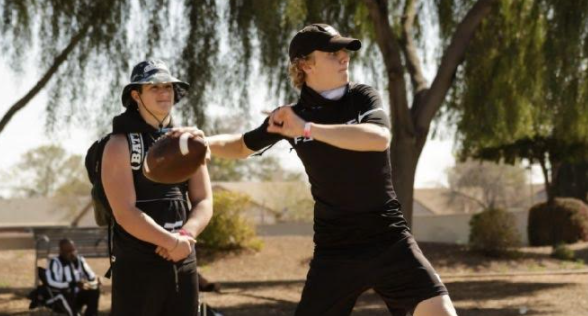 Due to circumstances out of his control, Tagg Harrison has become one of the top 7v7 quarterbacks in the nation. With football seasons shortened, and in some cases like for Harrison completely lost, Class of 2025 players had to get their reps in somehow, some way, to keep progressing. Without a tackle season, Harrison kept spinning it winning tournament after tournament traveling around the country with Future Elite Academy. With all back to normal in California heading into the 2021 season, the 5-10, 160-pound, rising talent will get to put his developing skills to the test with Pacifica High School.

In an RNG exclusive interview partnered with QB Hit List, Harrison updates us on his offseason workouts and preparing for the challenge of taking on varsity competition this fall with teams like Arizona State watching.

Tagg, looking down the line on the last few months, I see a lot of 7v7 tournaments under your belt. I believe I watched you win the Pylon LA tournament if memory serves me correctly. Which 7v7 team have you been playing for and where all did you guys play this spring and summer?

I was playing for Future Elite Academy. We did really well this year. We won national championship in Dallas, the Pylon Meca in Las Vegas, and a lot more; I forget. It was unfortunate to not have a tackle season, that is why we played some many tournaments.

When the 2021 season gets going, which team will you be playing for?

For the Pacifica Tritons.

What have you been working on with your overall mechanics this offseason preparing for the upcoming challenge?

I’ve had the opportunity to train with Jordan Palmer in Orange County for a week or two. We worked on the small things. He saw that my front foot was opening too far. Correcting that helped with my spin. Training with him has helped with my hips and lower body. I have also been doing speed training and getting bigger in the gym. I am getting ready for varsity. The trainer I work with has helped work with guys in the NFL.

How has playing 7v7 helped you understand defenses and recognize coverages?

Our offensive coordinator for our 7v7 team is Bryan Bennett. He has helped me with the reads. My reads and progressions have really helped me.

Have you been working with a QB coach this spring and summer?

Yes, I’ve been working with Bryan Bennett. He played at Oregon before Marcus Mariota got there. He was their starting quarterback. I train with him twice a week.

What has Coach Bennett been working on with you?

A lot of what we have worked on is back to the basics and the little things. He is helping me get ready for high school and understanding the playbook of things.

With all the time spent fine-tuning your skills, which areas of your game have improved the most this offseason?

The spin on my ball; that has been a big part of my offseason. My spiral started not being that great. I’ve been spinning it really well lately.

When the 2021 season gets going, what goals have you set for yourself?

The team I am playing for has gone undefeated in the regular season the past two years, I want to keep that streak going. For me, I want to progress as a quarterback physically and mentally.

Tagg, thank you for your time today. Wishing the best for you and the Tritons this season until we talk again.