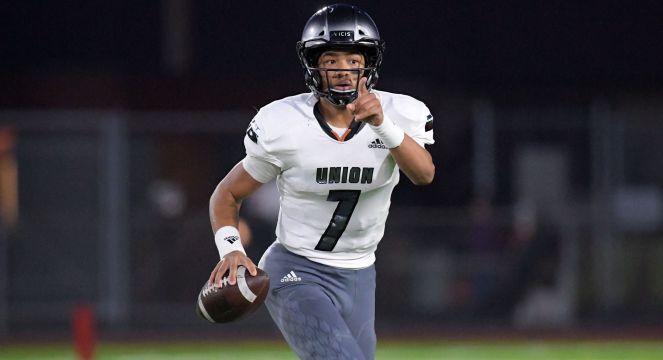 As evidence will prove, Caleb “CJ” Jordan is that prototypical high school quarterback running the Spread offense that offensive coordinators and quarterback coaches love. Beyond his senior stat line of 1,115 passing yards off 68 completions for nine touchdowns and 293 yards with four scores off 64 totes, the 6-3, 197-pound, dual-threat has led his Union High School squad into Washington’s 4A playoffs. His body of work has led to 19 scholarship offers being dropped, but all that came to an end for the three-star prospect just hours after this interview was conducted.

In an RNG exclusive interview partnered with QB Hit List, we got the inside scoop on Jordan’s thoughts on recruiting before verbally committing to the Vandals with an update on his 2019 season.

Caleb, watching your game film, it looks like you have a nice feel for the game in the pocket – almost like a point guard on the court. How do you or would you describe your play in the pocket?

“It is good of course I need to work on being more patient and wait on guys to open up. It is pretty good. I am looking at next year being ready to play.”

A part of your game that shows is your pocket presence and ability to throw on the run. Is that something you have worked on or does that come naturally?

“A little bit of both. I have always been rolling out on the run since I was little. That is a fun part of the game – rolling out, keeping my eyes downfield and making plays.”

What are some of the other strengths to your overall game?

“My vision, arm strength, run when needed, reading defense, and throwing the ball accurately. My timing, that is something I work on the most. That has been pretty good this year as well.”

The coaches have a rotation going on between you and Alex Gehrmann, how does that work from game to game?

“During the preseason, coach told me they have been doing this the last few years so the guys behind the starters are prepared in case of an injury or for the following season. The rotation in the game, I have first two drives, then he goes in for the third drive. I am in for the rest of the game.”

Which game this season was a challenge for you either because of the rush or the coverage downfield?

“Skyview was a challenge. That was a challenging week for us. There were a lot of ups and downs with timing and being able to secure the pass and get the ball on time to the receivers against Skyview.”

How did you overcome that challenge and/or how did that obstacle make you a better player?

“It helped getting back to practice the next week working even harder on getting the ball out on time and seeing that defense in practice so you can overcome it in a game. When I saw it in a game again, I was ready for it.”

That’s great. Another important part of playing quarterback is leadership quality. What is your leadership style and what makes you a good leader?

“I am a motivational leader and I lead by example. I make sure the guys around me are doing their best on and off the field. I am vocal when needed and I will get on a guy if he is not giving the effort he can give.”

This season, which game has been your top performance?

“Our Week 5 game against Puyallup. We were down early in the first half by three touchdowns. In the second half, we had three drives in a row where we scored and got back into the game. I ran for three touchdowns and I threw the game tying touchdown. We scored on the two-point conversion but a penalty negated the play. We had to kick the extra point and missed it (42-41).”

Tough loss, but an exciting game knowing what you guys are capable of when driven. Turning to recruiting. How many offers are you holding?

Being a senior, have you taken any official visits yet?

“None yet, but I plan to in the next couple of months.”

Did you get to take any unofficial visits over the summer through this fall?

“Yes. I have visited UCLA, USC, Washington State, Oregon, and Oregon State during the summer.”

This fall, have you taken any game day visits?

“I went to Idaho’s homecoming game against Idaho State.”

How did the Idaho visit go?

“It was nice. I really enjoyed it. I can see myself there. Their indoor stadium is nice, especially when it gets cold outside. Idaho has a nice campus and nice school overall. That visit, it gave me a good feeling.”

When the time comes to start taking official visits, where might you go?

“The planned visits are to Idaho, New Mexico, and Navy, that I know of.”

What does the ideal collegiate fit for Caleb Jordan look like?

“Location does not matter much to me as long as it is a best fit. Academics are important. Football wise, I want somewhere I can play when I get there. Some schools like you to redshirt, I am okay with that, but I feel like I can compete at the next level.

“I want to go to a place where people want to work and the coaches care about you, I am a relationship person. The Spread offense is what I like running. I grew up in that offense, and it is comfortable for me. I can run other offenses, but I like the Spread. I just want a chance to play at the next level. I know I can play.”

Going back to football. The Titans close out the regular season on Saturday against Mt. Rainier (7-1-1). What do you guys have to do on offense to help get the “W” against the Rams?

“As long as we stay focused, do what we know how to do, be fundamentally sound, drive down field, get stops on defense, and take advantage of opportunities we will be perfectly fine. We can score really well. We are a really good team overall.”

For this game, win or lose, what are the playoff implications?

“We won two weeks back, that got us into the playoffs. We played our conference championship already, we lost last week. This week is about seeding.”

CJ, I appreciate your time today and wish you and the team luck in the playoffs.