One to Watch Interview with 2021 North Carolina QB Gavin Kuld 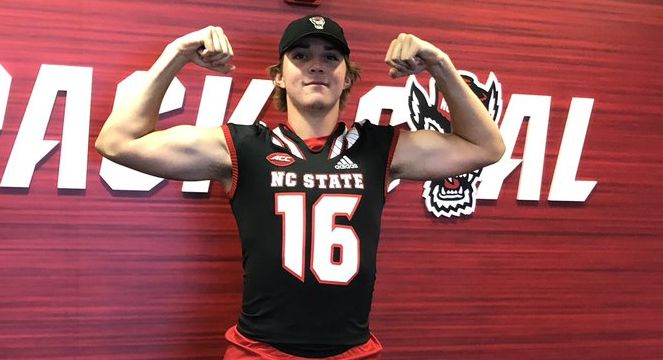 A move in the offseason from South Iredell High School to High Point Christian Academy has Class of 2021 quarterback Gavin Kuld competing for a starting spot with a new team. The Cougars broke Kuld in over fall camp preparing him for time in on the field in their offense, and the efforts have already paid off. In the season opener for High Point Christian Academy, the 6-6, 220-pound, quarterback worked in against Commonwealth completing 3 of 5 passes for 12 yards with a touchdown and ran in a two-point conversion. As Kuld gets more comfortable within the new offense and with his new teammates, college coaches will be watching. Kuld’s raw talent and upside were on display at college camps across the nation garnering attention and three-star recruiting status from QB Hit List.

In an RNG interview partnered with QB Hit List, I sat down for a quick one-on-one with Kuld.

Gavin, the Cougars opened the season on Aug. 16 getting a big 45-0 win over Commonwealth. What was it like for you being back on the field in live action?

“It was great. There is nothing better than winning.

How did the game go for you?

“I threw my first varsity touchdown, that was nice, and I ran in the two-point conversion.”

What did you do well in your opening performance with High Point?

What style of offense are you running with the new team?

“We run a lot of spread and we run some under center with a tight end.”

What did you work on over the offseason to prepare for the 2019 season?

“Since last year, football has never stopped. I practiced during the season and I kept going. I have been working on my game all offseason. I worked with a QB coach, Anthony Boone out of Charlotte, on my footwork, release and mechanics. He got me squared away.”

Did you go to any college camps over the summer?

“Yes, sir. My summer was packed with camps. A few camps I went to were West Virginia, Florida, and Arizona. I was all over the country.”

Of all the camps attended, which was your best camp performance wise?

“I believe the N.C. State was my best. My Arizona State camp was a good on too.”

I know everything is just starting out for you with recruiting, especially after transferring to a new school. Heading into the season, which schools are showing interest?

“I am receiving interest from Charlotte; they are coming to our homecoming game. N.C. State is showing interest as well. They are waiting to see how I play this year.”

Are you planning on visiting any schools this fall?

“Yes. I am trying to set up ones with Charlotte, N.C. State, Duke wants me to come, and Virginia Tech at some point.”

You guys have another game this week squaring off against Cabarrus. What kind of game are you looking at against their defense?

“We are looking at quick hitters. I think we can take advantage of one of their corners. We have great receivers and tight ends to throw to; we great talent on the team. We have a lot of D-I athletes on our team.”

What are some of the other big games on the schedule this season?

“Charlotte Latin for sure. That is our homecoming game.”

When the season is finished what goals will you have accomplished?

Gavin, thanks for your time today and good luck with the rest of the season.