One to Watch Interview with 2024 Alabama QB Kamari McClellan 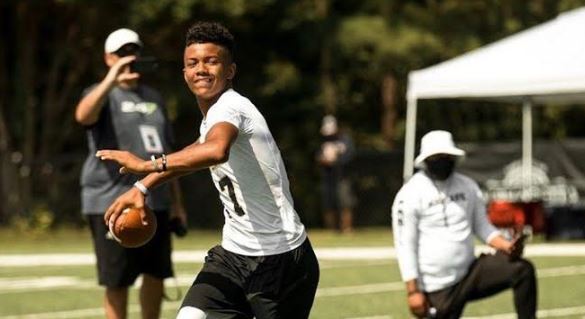 When the 2019 season ended, Oxford High School (14-1) had captured a 6A Alabama state title cementing their place among the elite programs in the Yellowhammer State. Expectations are once again high with senior field general Trey Higgins back along with top target Roc Taylor, and the future looks extremely bright to keep the momentum going with Class of 2024 gunslinger Kamari McClellan developing.

McClellan, a 6-1, 160-pound, talent, caught national attention along the recruiting trail and earned an in-class No. 4 national ranking by QB Hit List for his efforts against his peer group during the 2019 season. McClellan was also being groomed last season for his future varsity spot being called up to practice with the high school squad a year ago. As the Alabama high school football season draws closer to kickoff, elite college football programs like LSU and Oklahoma will be watching McClellan’s progress this fall.

In an RNG first-look partnered with QB Hit List, I sat down with McClellan to learn more about his game in a detailed Q&A interview.

Kamari, as an eighth grader last season you were making some high school level plays. There is a natural instinct to the game you have. If possible, tell us where that comes from. Is that from playing experience and watching countless hours of college and NFL football?

Yes. I study games, I go over my coverages, and I practice in the afternoon. It is all the work I put into the game.

You were making some Saturday throws against your peer group in game. What offense were you running last season and what were some of the routes within the scheme?

We ran a lot of quick game stuff. I had to do different stuff to make plays. We were in the shotgun running trips. I was throwing slants, post-corners, and goes. Our coach made the offense simple for us. I will do more this year with our offense.

During the 2019 season you also got to show your dual-threat talents. How did that part of your game improve a year ago?

I was the only QB we had, I tried to not run too much, but it did improve last season.

Looking back, what were some of the things you learned on the field in 2019 that helped you grow as a QB?

Last season I learned more how to avoid the rush, my leadership grew, and I got better at reading defenses.

What have you been working on this offseason with your mechanics and technique?

My escape drills, my footwork, keeping my shoulder up, and making sure my footwork matches certain routes.

How have you worked to expand your understanding of the game over the spring and summer months?

By going over our plays with every coverage, Cover 0 through 4. I have been on the field with my players going over all the plays and then I go home to watch what I messed up on to improve for next time.

What style of offense will you execute with Oxford this season?

We run trips out of a Spread.

With the step up in play, how have you worked to adapt to the high school game?

Last year I was practicing with the varsity, but on Fridays I was not getting in the games. It has been normal for me. I know what to expect.

That’s great you got that feel last season to help you grow even more this offseason. When did the Yellow Jackets begin fall camp?

We started on June 1st, we got in helmets and shoulder pads at the beginning of last week.

How has camp gone for you personally?

What is the QB competition like on the Yellow Jackets roster this fall?

There is a senior ahead of me, a 10th grader and I are competing for the backup position.

The team opens with Thompson on Aug. 22; how fired up is the team ready to kickoff the season to start defending the 6A crown?

We are ready. Our defense is looking good. We have been talking about it at practice a lot. We’ve been waiting, going hard, and we are ready to go.

As an underclassman, college programs cannot have direct contact with you, but the best that you know which schools are showing recruiting interest?

There are a lot of coaches and schools following me on Twitter; Oklahoma, Georgia, Georgia Tech, Georgia State, FSU, Virginia, and a lot more that I cannot think of right now. Lincoln Riley, sent me an invite to a camp, LSU did as well.

Awesome. Kamari, thanks for your time today. Wishing you and the team success this season.