One to Watch Interview with 2024 Georgia QB Jahsier Ratliff 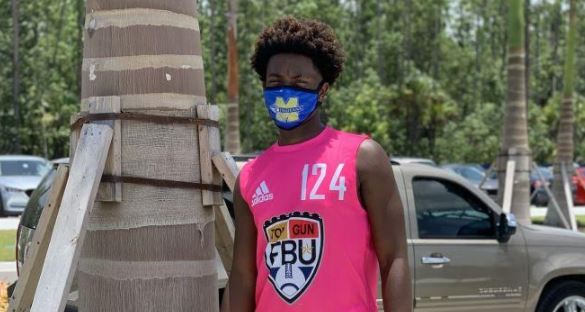 There never seems to be a shortage of high-quality high school quarterbacks coming up through the ranks in the state of Georgia, and that premise is set to continue with guys like Jahsier Ratliff. Ratliff teed off on guys in his peer group last season throwing for an estimated 1,000 yards with 18 touchdowns while rushing for another 200 with five more scores going up on the board. The 6-1, 180-pound, field general has personal goals set to be elite, and is not taking the path to being among the best of the best lightly. In addition to the work put in with his new high school team, McEachern, Ratliff is working with two quarterback coaches, one on mechanics and the other for the mental approach to the game.

As the 2020 season is set to get underway in Georgia, Ratliff is in process of learning the Indians Spread attack with sights set on being the team’s starting junior varsity quarterback while backing up returning starting signal caller Bryce Archie. For a rundown on his first varsity camp, Ratliff sat down for a Q&A interview partnered with QB Hit List.

Jahsier, you spent the 2019 season airing it out in a Spread offense showcasing the arm talent. How does your style of play and skillset fit that offense so well?

I am a strong quarterback. I can sit in the pocket, read the field, run an RPO (run-pass option), I have a strong arm getting the ball downfield, and I can hit the short routes when needed.

There may be some overlap here, but when the 2019 season had ended, what did you feel were your overall strengths as a quarterback on the field?

Staying strong in the pocket, my pocket presence is really good, and I can move around well.

Once the new season gets underway you will be suiting up with McEachern High School. What style of offense are the Indians running this season?

Mostly a Spread with doubles. Sometimes we do go under center in a Wing T.

From a Spread to a Wing T, that is different and challenging for defenses. How have you worked to develop chemistry with your new teammates this summer?

Before the season started, we would go to Mud Creek Park to workout, and I would throw routes with them. I was showing them then that I can lead.

With each step up in competition for all athletes there is an adjustment that has to be made to the skill and talent around them. What are some of the biggest adjustments you’ve had to make and how did you go about making them?

The tempo and speed of the game. From middle school to high school, it is way faster. The defensive linemen are bigger and everyone is better. Getting a lot of reps has helped me adjust.

What have you been working on with your mechanics this spring and summer?

How have you expanded your football IQ this offseason for a better understanding of the game and what you may face this season?

For that I have been working with another QB coach, Chris Hickson, doing the QBIQ System. That helps me read coverages.

The Indians play at the highest level in one of the toughest football states in the country. How have you worked to prepare your body for the physical grind of a full 7A football season?

I have done a lot of lifting and cardio. I am trying to get heavier because I don’t want to be scrawny this season. So far, I have gained 10 pounds since we’ve started conditioning.

Nice. When did you guys start fall camp?

We started around early June.

Have you guys already put on the pads?

Yes, sir. We went full pads back in mid-June.

Wow. So you guys have really been going after it for a while. What is the QB competition like for you in camp this year?

I am learning by behind Bryce (Archie).

Are you preparing to be the starting JV quarterback?

How is the team looking in camp?

When does the season start for the Indians?

Jahsier, wishing you and the team the best of luck the rest of the way in fall camp and with the 2020 season.