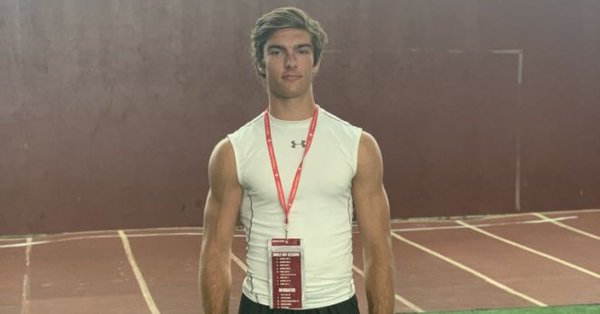 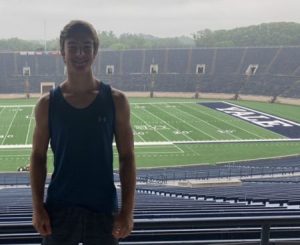 When the field lights turned on for Corner Canyon High School in 2018, there was little that 5A Utah defenses could do but hope that the Chargers just happened to take it easy on them… but that wasn’t happening. The Chargers lived up to the name with a new and electrifying quarterback in the pocket guiding his team to a perfect season. The newcomer looking like a seasoned veteran burning defenses with his arm, mind, and legs was Class of 2020 gunslinger Cole Hagen.

Few athletes who lay in bed at night dreaming about upcoming games and seasons actually turn those thoughts into reality – one of the few to do it is Hagen. Appearing in six games for Corner Canyon during his sophomore campaign playing behind senior Zach Wilson, Hagen showed signs of things to come hitting 31 of 50 attempts for 460 yards with seven touchdowns without throwing a pick. Another glimpse of coming attractions was the 142 yards on the ground with a trip into the end zone. The big question was what can Hagen do over an entire season?

Expectations were high in Draper for the Chargers to make another deep run into the playoffs in 2018 after an 11-1 finish the year prior. The high level of success for Hagen in the pocket during his junior season may have surpassed even the highest of expectations with the 6-2, 185-pound, quarterback showcasing it all. In the 12-0 season culminating in hoisting a 5A trophy, Hagen completed 63 percent of his passes connecting on 198 of 314 for 3,389 yards with 37 touchdown passes tossed. He earned the dual-threat label with 658 yards on the ground and nine more big scores going up on the board. After earning first team All-State, first team All-Region, and Utah Offensive Player of the Year 5A, college coaches are recognizing Hagen’s skillset with offers coming in and interest building.

In an RNG exclusive interview partnered with QB Hit List, I sat down with the three-star recruit who is a true student-athlete covering the 2018 season that included a state title, multitude of great post-season honors, 4,047 all-purpose yards with 46 touchdowns while receiving an update on his offseason workouts.

Cole, what was the state title run like for you personally last season?

“It was unreal. That is the goal everyone has from the start. For our team to achieve that was pretty special.”

Was there a point during the season when you had an idea this could be a perfect run?

“To be honest, I never thought too much about it during the season. As we were getting deeper into the playoffs, it set in that we could accomplish it.”

Was there also a point during the season when you felt in complete control of everything going on within the offense?

“In our Timpview game (Week 3), that was our first week where the offense was all together. Before that game we were doing alright. But that was the first game we were really solid (won 53-21).”

Every player faces a challenge during a respective season; what challenge did you face last year and how did that challenge help make you a better quarterback?

“Our offense is complicate; we have a lot going on. We have some great coaches that help us learn the plays and how things need to be to run efficiently. Learning the offense was a challenge.”

How did your game on the field improve last season?

What are the strengths to your game?

“I am a pretty smart kid. It is important for me knowing what to do in certain situations and having no unforced errors. Having good coaches is a strength to my game. I feel that my arm strength is also a big part of my game.”

How have the Chargers looked in practices this offseason?

“We have started off with 7v7 practices and tournaments this summer. You could tell the guys were excited to be back out on the field. There has been no complacency after winning the title. We have come out hungrier. We are in summer conditioning and lifting. Everyone has bought into the program and system.”

What have you been working on this spring and summer?

Have you competed at any camps this offseason?

“Yes. I competed at the Elite 11 (Oakland). I competed at some college camps as well: Utah, BYU, Utah State, Stanford, Harvard, Yale, and Princeton.”

Wow. A lot of camps and competing. How did the Utah camp performance go?

“It was the All About U camp; and invite only camp. It was pretty special to be at the camp. With testing, I had some of my better times. I ran a 4.09 pro agility shuttle and a 4.6 40-yard dash. That was one of my better throwing days. I had some receivers at that camp. With that chemistry, we were clicking easier on the routes.”

Which schools have offered you already?

“I have offers from Dixie State and Yale.”

Which schools are showing interest?

“Yes. I have taken visits to Utah State, BYU, Harvard, and Yale.”

How did the BYU visit go?

How did the Harvard visit turn out?

“Things have a different feel there, especially being an older campus. There is a lot of history there as one of the oldest colleges in the county. There really is a lot of neat history at Harvard. The campus is really cool. I liked the older architecture.”

With an offer from Yale, the work in the classroom must be top-notch. What is your cumulative GPA?

What is your best score on the ACT and/or SAT?

Fantastic. Last question. What is your leadership style with the Chargers?

“My style is more of being an example of what to follow. I am not afraid to step up and say something if needed. I am the guy that will show you what you need to be doing and who will tell you about it when needed. I have gained the respect of my teammates with my style of leadership. When they see me doing something, they have a good idea to follow suit.”

Cole, it was a pleasure learning more about you and your game today. I appreciate your time and wish you continued success with your summer workouts.