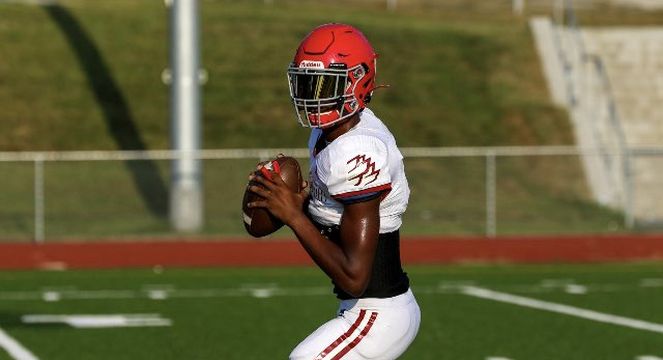 On many high school football programs across the country, the quarterback position highlights the best athlete on the roster. Head coaches need a playmaker under center who can put points on the board and wins in the column. At Van Horn High School, Sean Mitchell Jr. is that guy for the Falcons.

Few gifted three-star quarterbacks are also elite defensive backs, but that is what Mitchell brings to field. Going against 4A Missouri teams, his junior season was a stat filled affair slinging the pigskin for 1,390 yards with 28 touchdowns while rushing for 441 yards making four individual trips into the end zone. Playing free safety, the 6-2, 180-pound, talent became a thumper who can cover with an estimated 45 tackles, four picks, and two forced fumbles on the resume. In stats posted through the first three games of the 2020 season, Mitchell has connected on 42 of 72 attempts for 679 yards with 10 touchdowns and has toted the rock 30 times for 306 yards with four more scores.

The action on the field has college football programs debating on his best impact at the next level, quarterback, receiver, defensive back, or as an athlete with set position to be decided later. Regardless, Mitchell’s abilities have brought six offers to the party.

With Van Horn High School midway through their 2020 season, Mitchell sat down for an RNG interview partnered with QB Hit List.

Sean, there is so much for us to talk about with your play at quarterback, but I have to start with your athleticism on defense. It is odd to call a quarterback “a QB head hunter”, but that is what you did last season. Talk about lowering the boom on some guys. Tell me about your time on defense in 2019.

That was my opportunity, I played safety my sophomore year earning All-District honors. For me, I underperformed a little last year. But having that QB knowledge helps me on defense. With that knowledge, I used that on how can I affect the play and how I can throw the quarterbacks off. I tried to confuse quarterbacks and make as many plays as I could last season.

Are you playing defense again in 2020, if so, at which position?

I’m not playing a lot of defense this season. The coaches have me in as a red zone corner or in a prevent defense. They want me primarily at quarterback, but in situations against a No. 1 receiver, they will put me out there because of my experience.

What style of offense were you guys running last season?

Last year, they were trying to introduce me to the West Coast offense. We ran a lot last season with some passing, but we did not do much motion. The offense was very read oriented.

What are you guys executing this year?

We expanded more on the offense. We are running a Spread, some empty formation, putting guys in different formations and in motion. The coaches will roll me out to make plays on the outside. The goal is to get the ball to the playmaker. I am still doing reads, but the primary focus is to make a play.

When needed, you can put a foot in the turf and take off. How did that skill as a dual-threat take big strides forward last season?

We had a really good running back last year. Teams saw that as the season went on and focused on him. Doing our read option, out of fear of him making a big play, the defensive end would crash. When he did that, I would pull and go. Ball carrying is part of the job, I have honed into that.

As mentioned, you have the speed to go. What is the best 40-yard dash time you’ve posted?

Your arm is on point making the 40-yard touch pass into the corner of the end zone, flinging it on a rope to the sideline, and dropping it down the seam. What are some of the routes you are throwing to within the scheme(s)?

We have fast guys this year, so I am not having to worry about putting it on a rope as much. The receivers are running smoke routes, vertical routes, and quick hitches. We have not had to push it vertical as much this year. We are saving for that later in the season when they walk down. I was throwing a very nice deep ball last year.

Yes, you were. When you went into the offseason what did you focus on with your skill to prepare for you junior campaign?

Becoming more of a player of the game. This offseason I did a lot of film evaluation with my coaches. My goal was understanding football more other than just being an athlete out there making plays. I improved my IQ this offseason. Last year I was more of a slinger. My technique was not very good. This offseason I was working on my overhead release, my steps, and making people miss in the open field.

The Falcons offense has started out hot averaging 42.5 points per game. What is working for you guys this season making that unit so deadly?

My receivers. I don’t have to sit back in the pocket and thread the needle. I am getting it to them and they are making plays. We spread them out then run it down their throats. Our receivers are making problems for defenses.

From last season to this year, after all the hard work put into your game where are you seeing the improvements in your skills on the field?

My ball carrying has improved. I am able to win those one-on-one matchups. We are running some QB draws, I am making linebackers miss. I can drop my shoulder and run over a linebacker when needed. But I am also smart knowing when to slide or get out of bounds.

Is there an aspect to your game that might get overlooked?

Football is a team sport. The quarterback’s job is to get the ball to the playmakers, and sometimes that is throwing five-yard hitch routes. A lot of my game is throwing to my receivers in the short game, not 30 or 40-yard passes. We run a lot of quick smoke routes and my receivers are making plays but I can get it down field.

This week is a short one with Lincoln College Prep (3-1) on Thursday. What kind of game are you expecting from their defense?

They are a physical team; it will be a physical game. That is what our coach has preached to us. They have had success; we cannot take them lightly. We have to hit them in the mouth and hit back when they hit us.

Let’s get into recruiting. Which schools are showing interest as the season heats up?

Central Missouri (UCM), they see me as a receiver, Missouri Western, they like me as a defensive back, and Wayne State likes me as an athlete. There are some other D-II schools see me as a DB or athlete. That is okay with me, I just want to play college ball.

Have you taken any virtual visits?

Yes, I have taken a couple. One virtual visit I took was with Mt. Saint Joseph. I did some quick overviews of other schools.

If visits were allowed next week, which schools would you like to see in-person?

Bethel (KS), Evangel, and UCM; they me and one of the defensive ends at my school on campus. There are some schools in Iowa, Dakota Wesleyan and MidAmerica wants me to take an official in a couple of months.

Do you compete in any other sports at Van Horn?

Yes, I also compete in track.

The triple and long jump.

What are your best jumps?

Sean, it was great getting time in with you today. Wishing you and the Falcons great success the rest of the way.

RT @AlexRocco13_: Jaxon Smolik has had a whirlwind of a year. In one year, he broke his collarbone on the first drive of his junior, comm…

RT @SBemisOnline: As we count down towards start of the HS football season Thursday night, learn a little more about Buchanan star QB Jayde…

RT @KolterSmithKY: Talking camps, visits and what impressions are most important with @YaitesJames thank you for the 🎙this week! @QBHitList…